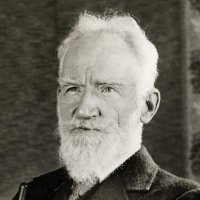 Nobel Prize and Oscar-winning Irish playwright, critic and socialist whose influence on Western theatre, culture and politics stretched from the 1880s to his death in 1950. Originally earning his way as an influential London music and theatre critic, Shaw’s greatest gift was for the modern drama. Strongly influenced by Henrik Ibsen, successfully introduced a new realism into English-language drama. Wrote more than 60 plays. With his range from biting contemporary satire to historical allegory, became the leading comedy dramatist of his generation and one of the most important playwrights in the English language since the 17th century.

Forgive him, for he believes that the customs of his tribe are the laws of nature!