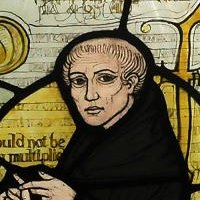 English Franciscan friar and scholastic philosopher and theologian, who is believed to have been born in Ockham, a small village in Surrey. Considered to be one of the major figures of medieval thought and was at the centre of the major intellectual and political controversies of the fourteenth century. Commonly known for the methodological principle that bears his name, Occam’s razor. Produced significant works on logic, physics, and theology.