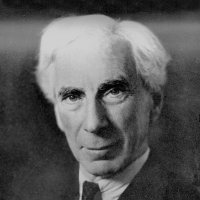 British philosopher, logician, mathematician, historian, writer, social critic, political activist and Nobel laureate. Considered one of the founders of analytic philosophy, led the British revolt against idealism in the early 20th century. wrote Principia Mathematica with A. N. Whitehead, as an attempt to create a logical basis for mathematics. His philosophical essay On Denoting has been considered a paradigm of philosophy. His work has had a considerable influence on logic, mathematics, set theory, linguistics, artificial intelligence, cognitive science, computer science and philosophy, especially the philosophy of language, epistemology, and metaphysics.

There is much pleasure in useless knowledge.