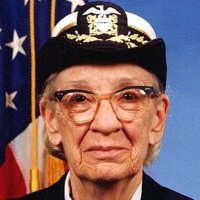 To me, programming is more than an important practical art. It is also a gigantic undertaking in the foundations of knowledge.